Sometime earlier this year, I think I had reached a personal threshold for managing information consumption where things just broke down.

I’m expecting this to calm down a bit, once I’ve finished my masters this summer, but for now, wrangling so many disparate inputs, with such disparate needs defining those inputs, is making for a slightly hellish time.

So I’ve spent the past few weeks experimenting with trying to get things organized… better. Maybe. I’m not actually sure yet, but I figured I’d share what I’m doing. This is very much a “thinking out loud” write-up, so I’m grateful for your patience on this.

I use two digital tools for this: Workflowy, which is a kind of infinite bullet list with some decent search tools, 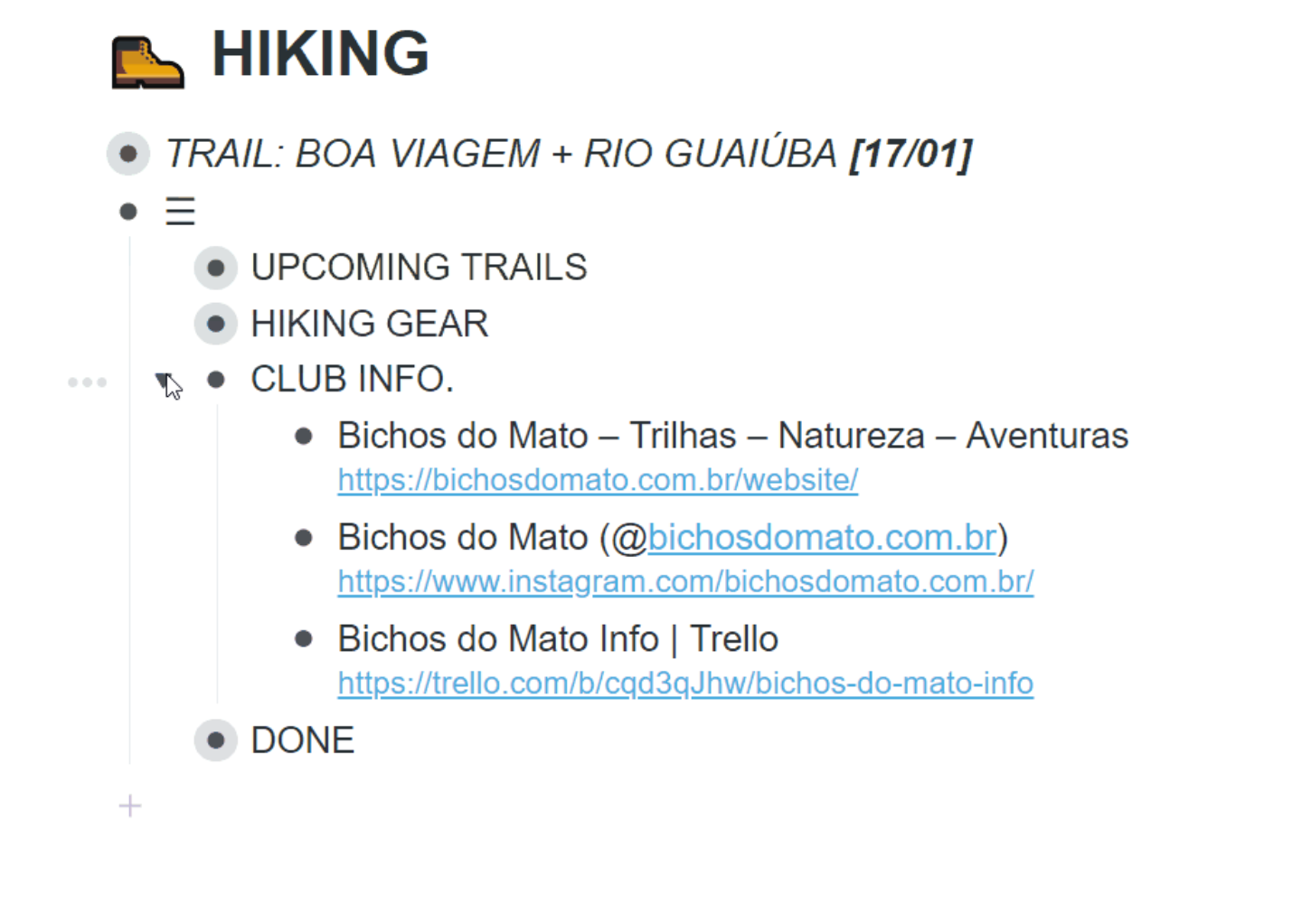 and a remarkable tablet for writing.

They are kind of unbridled “capture” tools, helping me to ensure that info lives somewhere. Unfortunately, both have their disadvantages.

Workflowy suits the way that I think about information — especially when doing qualitative research. I have areas that I want to explore, and I dig into them. Unfortunately it makes reflecting back on what I’ve recently captured pretty difficult. Tools like Notion are better suited for taking disparate information and organizing them as dashboards, but Notion definitely isn’t as blazingly fast as Workflowy is. So when I need a firehose of information capture, Workflowy is it for me. The Remarkable was a somewhat impulse purchase that has proven to be a huge boon. I really loathe reading on screens, and given the quantity of journal articles I was reading for school, I decided to try and make a change. Unfortunately, the Remarkable tablet doesn’t have a good method for highlighting at this point in time, so it ended up not being nearly as useful for consumption as I had hoped. It HAS been excellent for note taking though. I don’t necessarily reference back to all my notes, but having consistent, tagged, and even OCRed handwritten notes has helped me to keep track of conversations, whilst not distracting me, as computer-based note-taking might do.

So. Two ways to capture.

Once I’ve captured something, I need to somehow filter and cull that into something useful. Unfortunately, this has become a bit of a weak link. I used to do this in an app called Bear, which is just a simple Markdown editor. I’m actually writing this in Bear now, which I’ll get to. 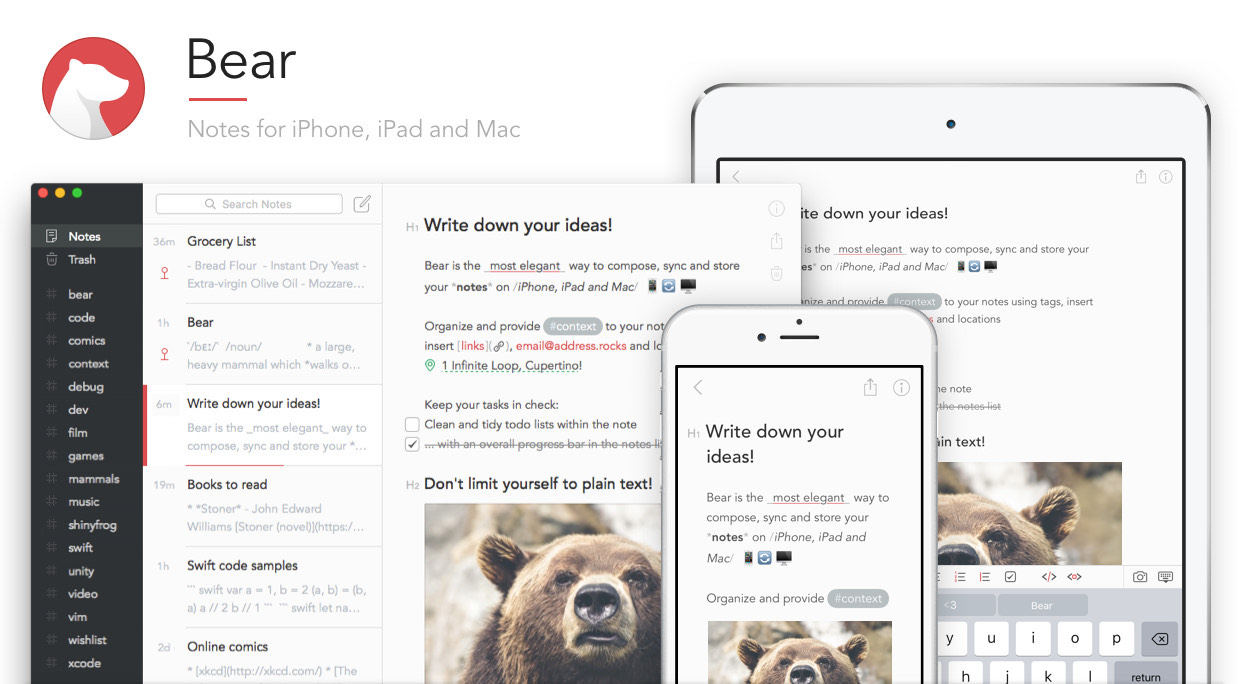 Unfortunately, Bear became a bit unwieldy for me to wrangle all the different notes I had coming in. I’d have a few things at the top pinned as “ongoing” work, such as my thesis, a list of people I want to connect with, different project and product ideas (both Knowsi and Stupid Fits got started in that list). 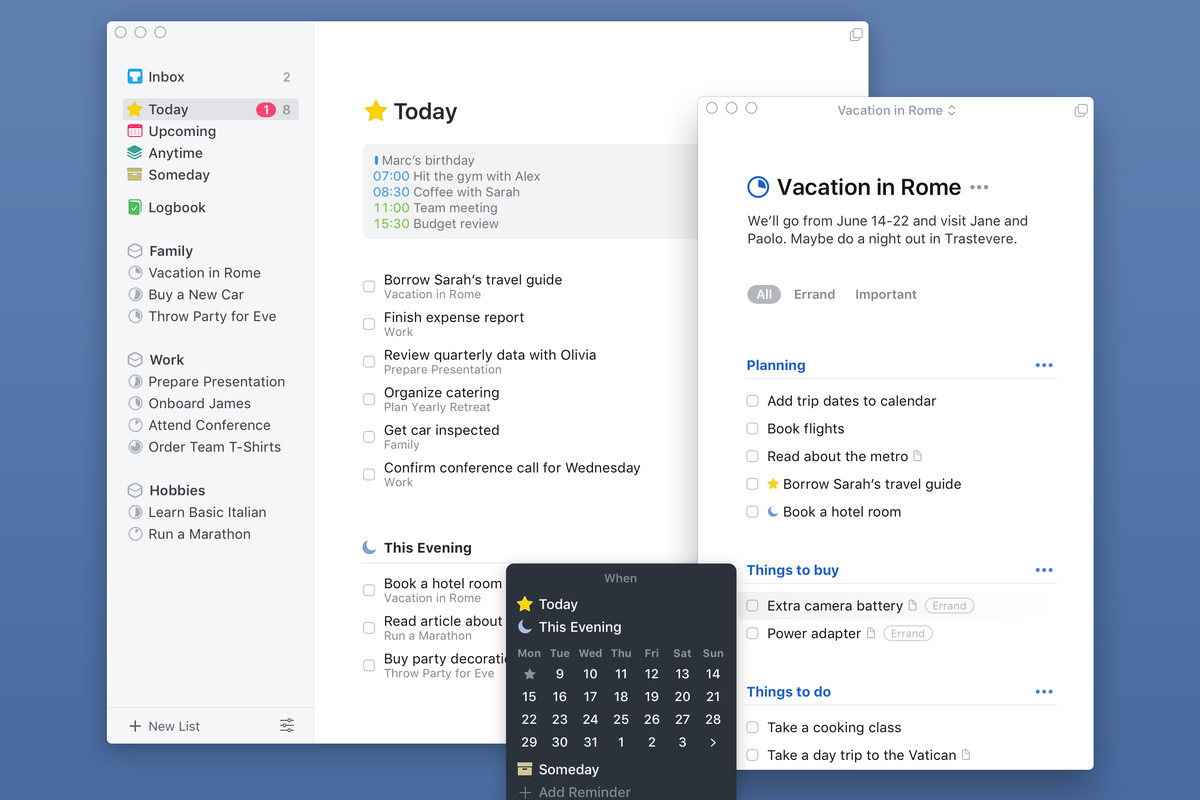 This is the weak link. Currently, this goes into Things for TODO items, and then I HAD been using Bear to capture secondary notes, but it hasn’t ended up working as well as I’d like. In theory, it’s easy to create cross-linked and similar notes, as well as coherent tags, categories, etc. But it never quite worked for me as a tool to prune AND connect information.

So currently, I’m doing two things. First, if there’s something I need to do, I put it in Things, which I’ve tried to quit about ten times now and keep returning to. It’s not great, but it’s useful as a personal to-do list. Quick in, quick out. The only other thing that seems to work for me to-do list wise is a Hobonichi style notebook. 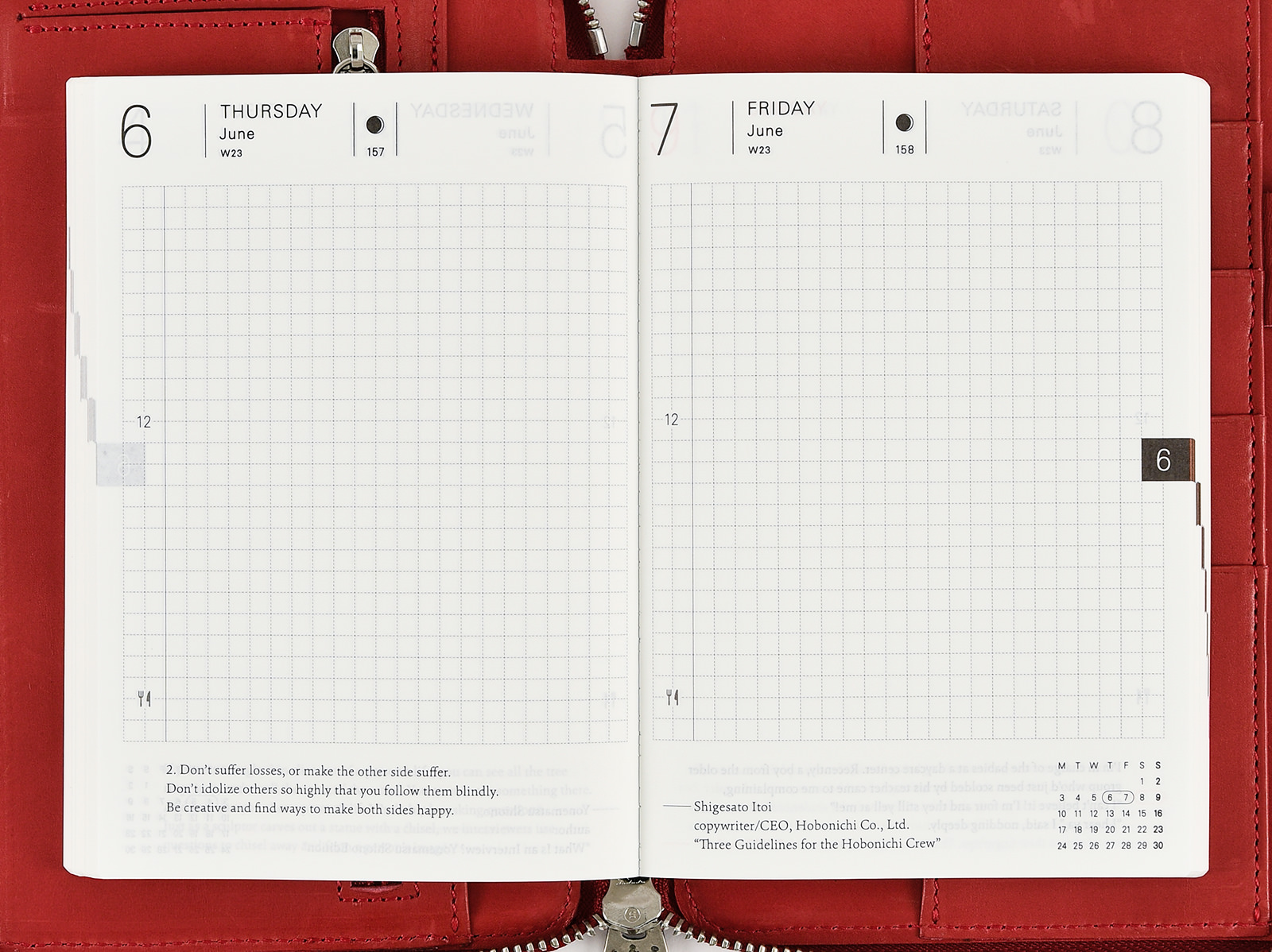 But that doesn’t solve the issue of connecting. It gives me a good basis for turning what I’m learning into something to do, but not for making longer connections for structured reflection.

There’s one more piece to the pruning side worth thinking about though, which is collecting references. I’ve been through a bunch of different tools for this, and actually, part of my newsletter is based on the idea of just sharing what I find to be inspiring. But partially, I’m hoarding information a bit. Using tools like Pinboard.in or Pocket, I have these really quick ways to capture stuff to read later — but then I don’t always read it later with enough attention to really capture and prune it. 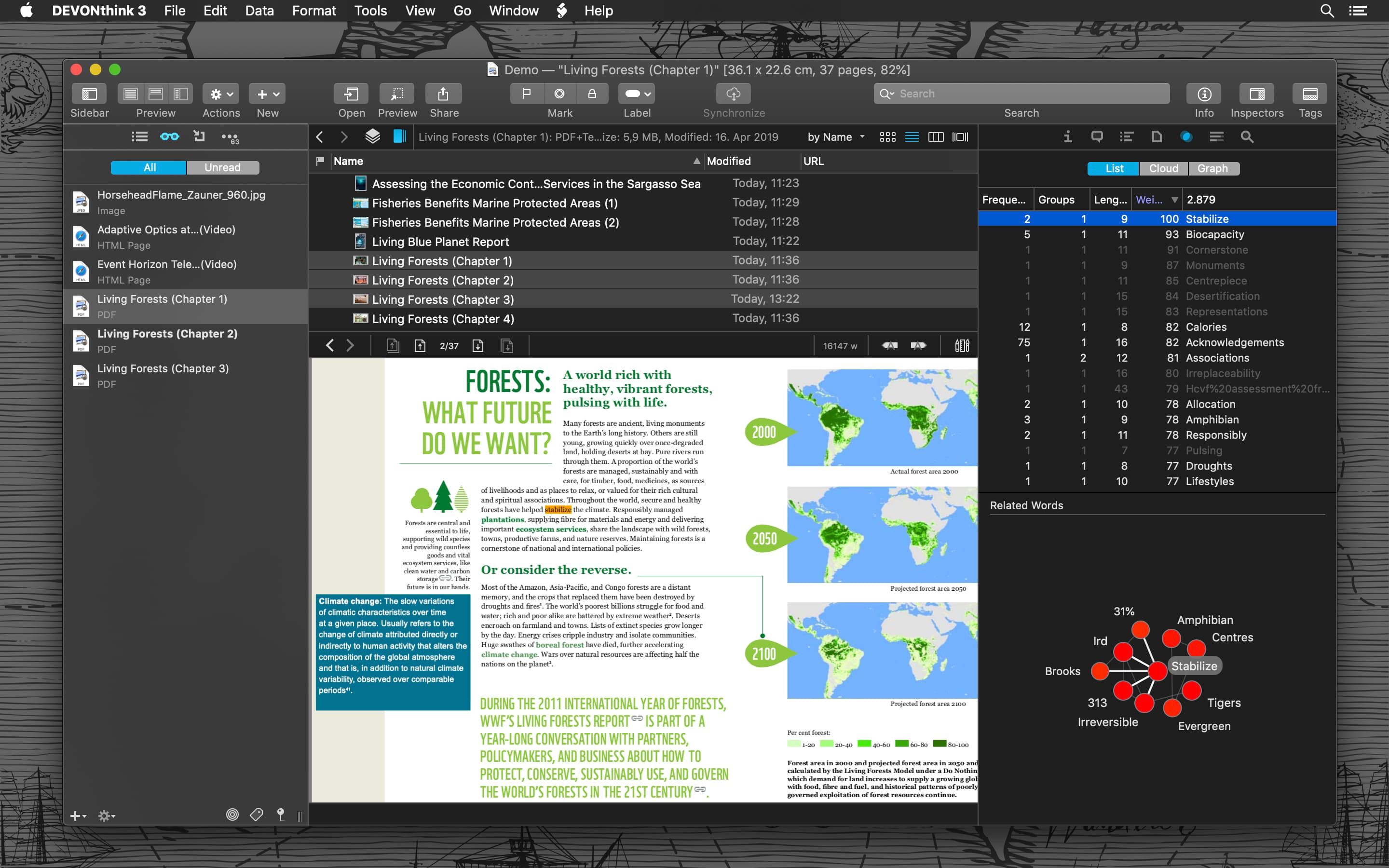 This is where I ended up investing in DevonThink, which I’m not yet sure was the right idea. DevonThink is basically a giant database and search interface that you pump information into, and it gives you a good basis for search and recovery. With thousands of PDFs, RSS feeds, and even podcasts (thanks to a clever script by Alex Chan I was able to modify), DevonThink becomes a kind of “starting off point” for when I have something in mind and but can’t quite remember where it lived. Unfortunately, DevonThink is also a monstrosity of complexity — presuming knowledge of file systems, scripting, and similar to navigate effectively. I know a lot of that stuff and am still struggling.

That said, I used it to get a start on a new essay last week and it got me started faster than I could have anticipated. So my hope is by investing some time in getting the DevonThink thing right, I’ll end up with an absolutely invaluable tool going forward. 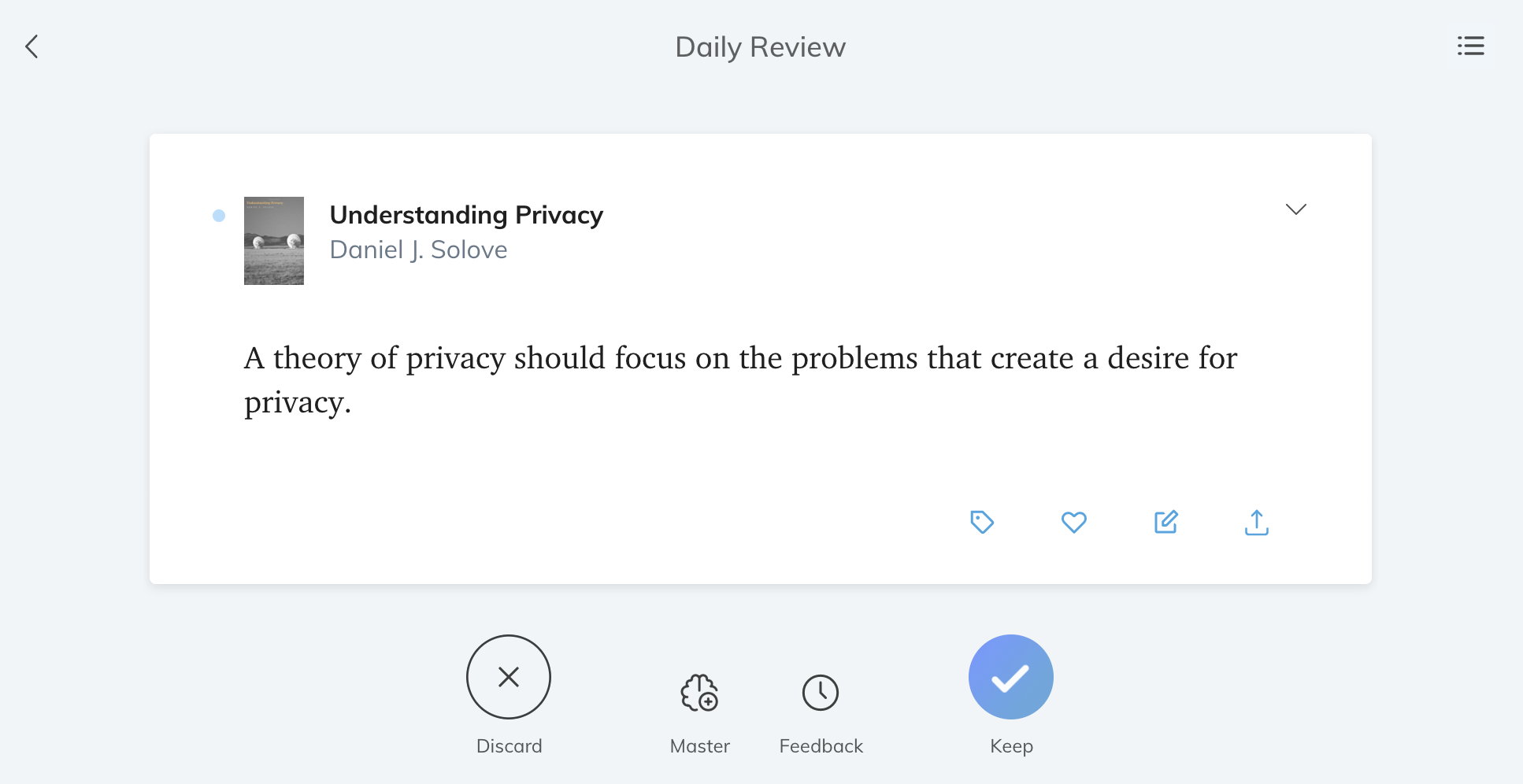 The other most recent attempt at this is Readwise, which I just discovered and absolutely love. It basically syncs your highlights in Kindle and other services, and then serves them back to you following the spaced repetition principle you find in most language learning software. I don’t know why I find this so charming and useful, but it’s been providing some great fodder for thought recently.

Bear does end up redeeming itself. I do almost all of my long-form writing in the app because I find it to be just blazingly fast for that. It’s intuitive, fast, and it’s the spot where I’ve written almost every article for this blog.

I don’t think it’s better than anything else, but if you’re like me and find Markdown the most intuitive way of writing, then it’s probably the best out there. I’ve tried a few others recently like Roam Research and Obsidian, but nothing really comes close. There’s a tactile quality to software sometimes that, despite more powerful options, somehow this one tool “feels right.”

This is a snapshot of something that has been consuming some of my thinking recently. I’m a bit over a month into a new research job, am continuing to write this newsletter, and am also working on a master’s thesis. Efficiency in time and staying focused around knowledge is basically survival right now.

The biggest long-term gap for me is the tagging/pruning step after capturing things, and I suspect there’s a process in Workflowy that I can go through that might get me there. You can add hashtags and dates, for example, so a note might look like

And that note could then show up in a search with: This week #followup if I wanted to create a saved search with a specific criteria. So ultimately what I don’t have with this is a good way to approach tagging.

Unfortunately, Workflowy is not well integrated with other things, so it becomes a struggle to get what’s in Workflowy OUT.

Ultimately though, there’s a set of tools that I’m discovering that is actually working pretty well, which is what prompted this post. I’m very accustomed to the tools for team collaboration, but to take the same care around tooling to manage myself instead of my team is a bit new.

So, stay tuned. I don’t write about this kind of thing too frequently, but I’ll share some updates in a few months about how things are going with this setup.

A More Intentional Wardrobe
I have an affinity for jackets and bags. The two central functions to protect and to carry somehow…
Andrew Lovett-Barron
January 19, 2020
8 min
Sponge Cycles
We all operate on cycles. Circadian, seasonal, fiscal, and academic — oscillating across frequencies…
Andrew Lovett-Barron
February 01, 2021
7 min
Planning your Design Research Trip
One of my more traumatic design research moments is something I barely remember. I had flown from…
Andrew Lovett-Barron
May 13, 2019
4 min
© 2021, All Rights Reserved.