With a reflective approach to narrative storytelling, Hamcus builds familiar yet foreign worlds through unique construction, distinctive dyeing techniques, and a well-considered design language. I wrote an intro to Hamcus earlier this year that should serve as a deeper introduction, but suffice it to say that the first of six drops in the Spring/Summer season of Hamcus continues the iterative refinement that I’ve come to admire in Tuff Leung’s work. 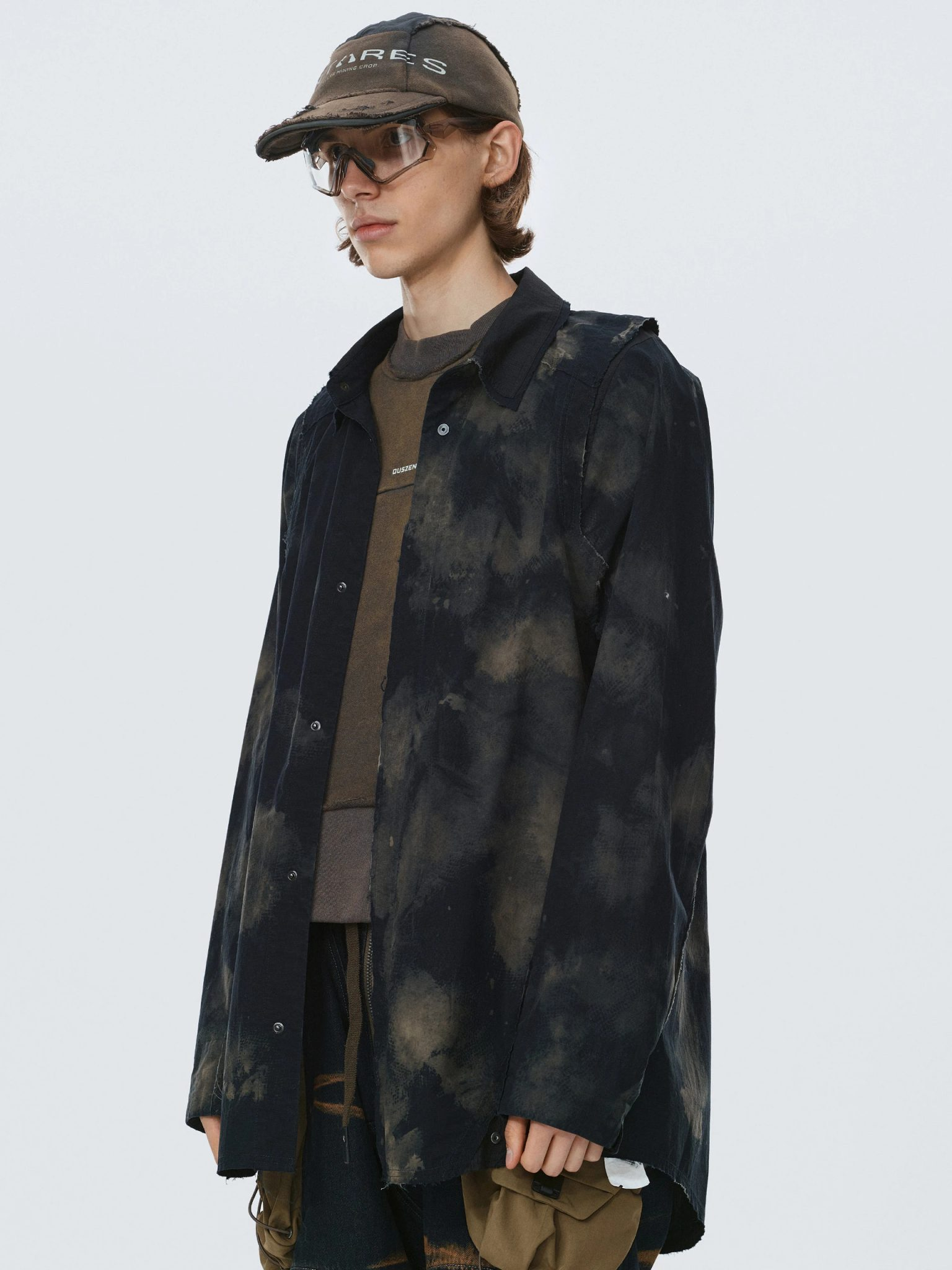 In this first instalment of SS21, we seem to be taking some time to consider power as a theme, more technical materials as a material evolution, and a preview of what’s to come. This final point is worth considering as well, as the Hamcus team has invested in updates to their site and marketing, to make an otherwise wild brand just that little bit more accessible.

2020 was a year, where global narratives surrounding power and privilege came to the fore through a corona-tinted lens. America saw mass death and civil unrest — culminating in an attempted insurrection in the first days of 2021. China saw an intensive lockdown following the spread of the coronavirus and months of unrest in Hong Kong in 2019 — with much of 2020 seeing China’s control over Hong Kong solidify through retribution against opposition members and legislative action.

So against this backdrop, a brand based in China with an eye to American markets sets out to tell a story about bonded survivalists and corporate power brokers.

Here’s what the Hamcus team shared to set the scene for this season:

Over sixteen hundred years before the great exile took place, the High Council of Primus Corporation came to the realization that irresponsible exploitation of V-19, their home planet, had caused irreversible damage, spurring its stellar core’s collapsing cycle. Primus’ High Council then activated a project of unforeseen dimensions: the construction of an interstellar ark engine capable of consuming alien stars, with the alleged purpose of taking the fire of civilization further than ever before. Behind these righteous words was veiled a rather sinister intention: that of expanding the corporation’s profits and exploitation to new and never-ending horizons. This star-devouring goliath was named GAEA.

Even though Primus Corporation possessed tremendously advanced technology for the time period, this dantesque project still required over four hundred years before GAEA was wholly completed and ready to explore the nearby star systems. Once the migration from V-19 to GAEA was finished, it set a course for the stars, devouring them to quench the interstellar engine’s bottomless hunger for energy and resources. Some were left behind to die on the collapsing native planet, though, and speaking of their demise is a taboo very few dare break. The years after the great departure from V-19 are collectively known as the post-exile era.

The lower planetary, which orbits at the bottom of GAEA, is arguably the most vital part of the entire ark engine. It is used for interstellar energy mining, loading, and extraction; but most importantly, it generates the enormous thrust required to move civilization through space. Most of the lower planetary’s residents are descendants of the first teams of voluntary engineers who built the engine city of GAEA. They’re the bottom of the spacefaring society, and they do most of the hard - not to mention dangerous - work under a lifetime contract for Primus. All in all, they’re expendable cogs in the interstellar ark engine’s daunting machinery. Those were the conditions their forefathers had to accept to avoid being left behind on V-19.

This engine city is where our journey takes place. JEJE, an orphan born in the post-exile era, lives a harsh life consisting of daily work routines assigned by ANTARES, an interstellar energy company subordinated to Primus Corporation. Like many other migratory descendants in the engine city, JEJE was raised by the Lower Planetary Union since her early childhood. She cruises through this hard-knock life with her robotic partner Dungee, a gravitational reaper built to salvage stardust from the edge city region, and transport it over the orbital mountain to the engine city’s refinery core.

In a vein similar to the epochal writing of Liu Cixin in his Remembrance of Earth’s Past trilogy, Tuff and his team compose technical, organizational, and environmental constraints around the narrative arc their creations both follow and construct. Harsh conditions, reused and recaptured materials, and corporate factionalism become the nodes around which garments, styles, and characters accrete. 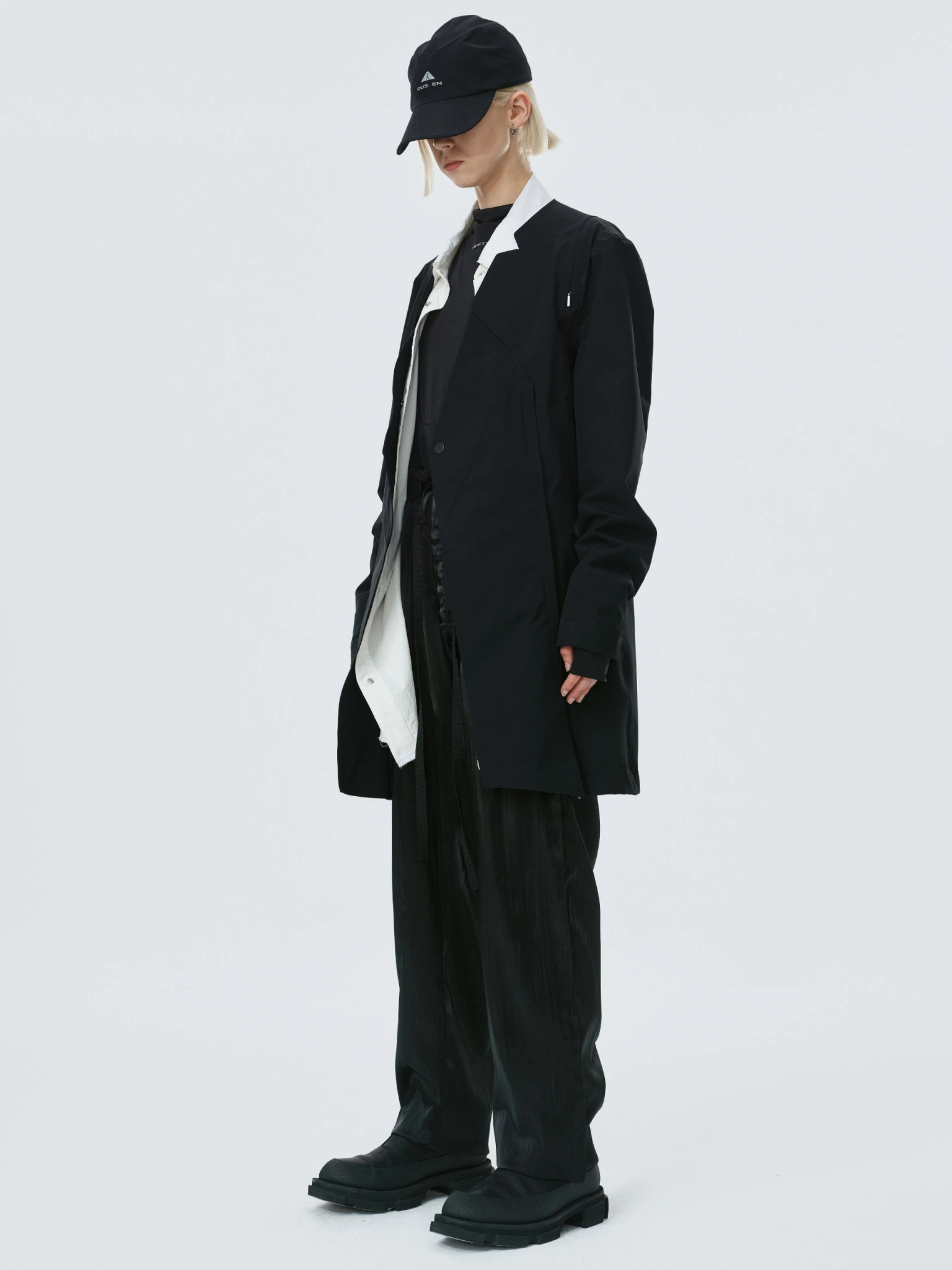 This particular blazer (almost sold out) is an interesting example of this. In the way that it’s styled, described and photographed, there’s an air of the private military contractor and corporate anonymity. Like most of Hamcus’ premiere pieces, it is able to transform in distinct ways — suggesting some hidden agency or power behind an otherwise familiar cut.

A few months ago, I wrote that Hamcus is not techwear. We might see some taped seams and technical fabrics here and there, but to wear a Hamcus garment in extreme ways (and I wear my Hamcus when I take my toddler to the playground) is to be prepared for fairly frequent and small-scale repairs — the same thing you’d expect wearing a pair of jeans or really any designer garment. Whereas Acronym outfits you for an MMA match in the alley outside Berghain, Hamcus is slightly more oriented towards a pensive and well-posed dolly-zoom shot.

That’s not to say Hamcus isn’t well constructed — it is, and it’s incredibly unique in its construction. But so far, it’s not been what I’d call tech. This new season seems to be pushing that frame a bit by introducing a variety of new materials that are explicitly and thoughtfully waterproofed, breathable, and designed for — one would assume — life as an Antares indentured labourer.

In some ways, I think this is the right way to approach this. Style itself doesn’t just tell the story, but the materials, cut, and treatment, each have their own tale to tell. The bleach dye of the Edge Vagrant is an interesting example of this — rough material and rough people on the edge, wearing what they have while character and garment transform together. Similarly, the Corpo Metallic Nylon Blazer tells its own story — a more refined cut that nonetheless privileges the wearer with some protection from the elements.

So, all of this is to say, I still don’t think Hamcus is techwear, but that’s great. Techwear can be kind of boringly uniform anyway. But at least now you can wear Hamcus in Seattle or London comfortably.

Previews of what’s to come

Hamcus has done a lot in the past few months to not just evolve their product (and the story that drives it), but also the accessibility of the business side of things. I’d written before that a chunk of Hamcus’ unique ability was their manufacturing connection and fashion industry experience.

They aren’t actually alone in this. Rick Owens, for example, is known to order muslin copies of his previous seasons’ pieces to be ripped up, chopped, and recut to actively iterate on the Rick Owens DNA in the most literal way possible — mutating and multiplying on past products. We’ve seen a bit of this with Hamcus, where particular blocks return across seasons and iterations, but the sub-assemblies (pockets, accessories, dyes) vary dramatically.

For SS21 though, they’ve taken some very smart steps in showing the appeal of Hamcus that previously had required a small leap of faith. By shooting more descriptive product photography and videos demonstrating the transformative qualities of their garments, it’s become much more obvious how some of the more unusual garments might fit into a daily wardrobe. They’ve also revamped their site navigation to be a bit more accessible and navigable. These all might seem like obvious evolutions, but accessing the Hamcus universe isn’t just about buying into the story — it’s also about understanding how particular garments might fit into your own day-to-day and your world creation.

Finally, Hamcus as always hints at upcoming drops in this first round of product photography. 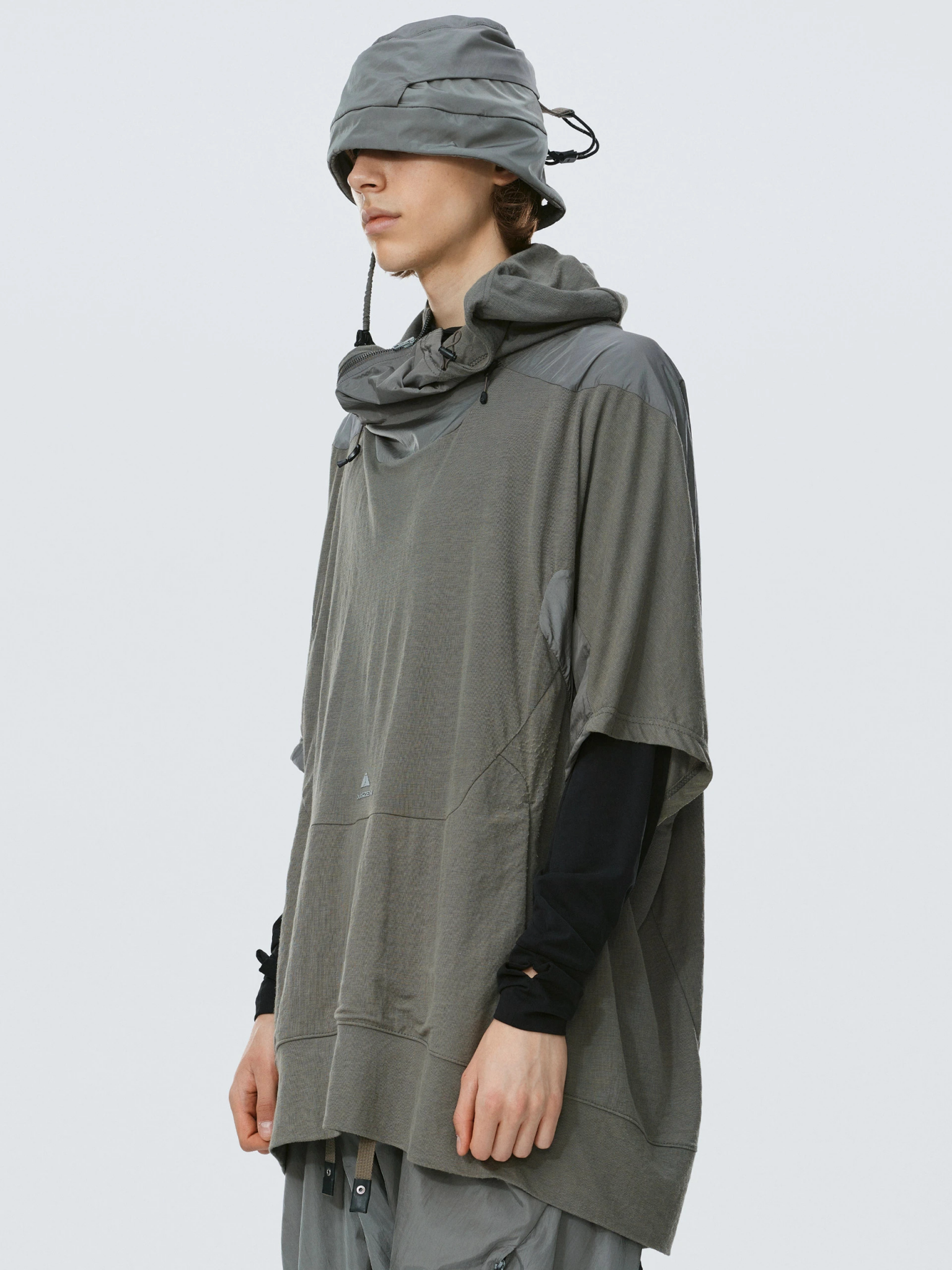 And a pretty wild cargo vest previewed with the vented sun visor. 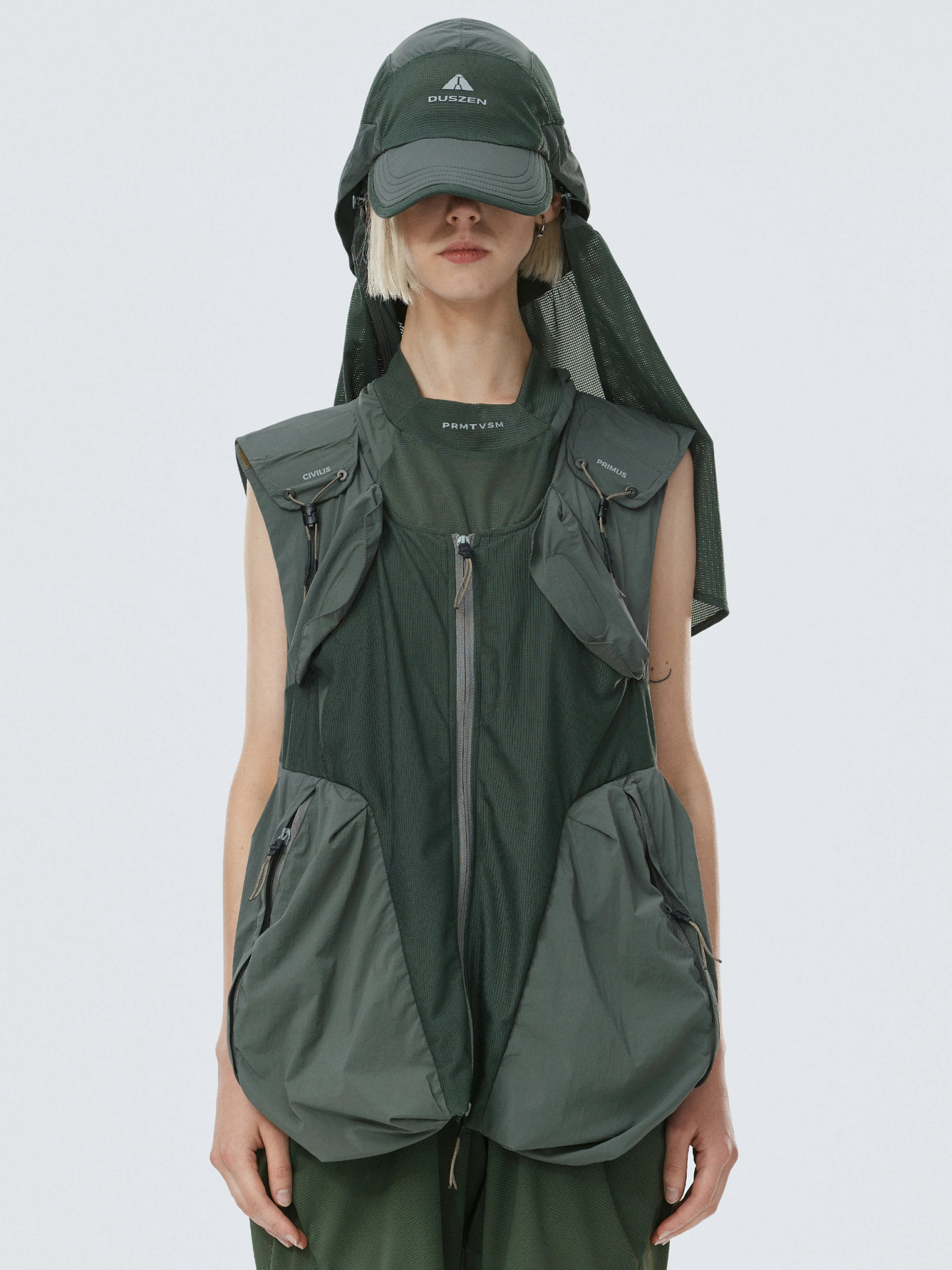 I’m excited for this next iteration of Hamcus’ journey. Tuff Leung and his team are building something interesting and worth participating in — and that participatory quality is something core to how they’re approaching it. There’s plenty of brands making wild clothes — Demobaza, Guerrilla Group, etc. But the continued “bet” on Hamcus (and why I follow them with interest) is that the narrative approach to their work will keep this brand and its designer’s vision focused and cumulative over the coming years.

Previous Article
War against Stagnation
Next Article
Wearing Technology
Subscribe to my weekly newsletter (along with hundreds of others). I keep it short and useful.