I have an affinity for jackets and bags. The two central functions to protect and to carry somehow stand out in my mind as being what this whole clothing endeavour is about. In the quest for a more perfect bag and a more perfect jacket, I’ve tried many form factors and materials. However, somewhere along the line this search evolved into more of a collection than a solution.

Taking stock of this jackets collection, I realised that many hadn’t been worn in some time and the same could be said for the rest of my wardrobe. I have my most comfortable quotidian wears, but a lot of the clothing that had inspired me up to the point of acquisition wasn’t being used according to that aspiration or inspiration.

Further, despite my attempts at the Marie Kondo approach (which definitely works), I’d hit a point of diminishing return. I really like the clothes that I have, though I suffer a bit from the Blokewear thing between Engineered Garments’s infinity pockets and Acronym nerdy functionality. They fit an acquired, developed, or aspired style most times; they were mostly of a quality that was worth preserving and repairing vs. replacing; and sometimes there was even an emotional connection or story tied to them. So another option was needed.

The digital closet is a trope that I’ve seen quite a bit from the tangible interface/new media world, not to mention the genius that is Clueless. What if computers could help us look good with what we have (though software business models being what they are, our wardrobes would likely balloon), and make the inferences and connections between different pieces of clothing for us. No need for colour coordinating, fit experiments, or quotidian creativity.

Elsewhere in my life, I’d been using different tools that “automated” the creative and planning side of personal fitness. Strava and TrainingPeaks both have scaling training plans that tie into your phone and your Garmin, effectually offloading the responsibility to plan and personalize. But I’ve come to believe this was creating an intellectual weakness in how I approached maintaining the body. When a training plan ended, or if I got knocked off it somehow by work, a cold, or travel, the return to that curated path felt unnatural. Despite the exhaustive metrics surrounding me, I didn’t know how I got there, so I didn’t know how (or why) to continue.

More recently, I’ve been using plans from the MT Institute, which just come as a weekly list of “Do this.” There’s no tracking or technical sophistication: their app is basically just a text document with a password with a few links to youtube videoes for how to do certain exercises. It was infuriating at first. But because of that friction, it has forced a planning and engagement with my fitness that I haven’t had in years. Somewhat naturally by extension, I started to learn the how and why of getting somewhere and keeping going. 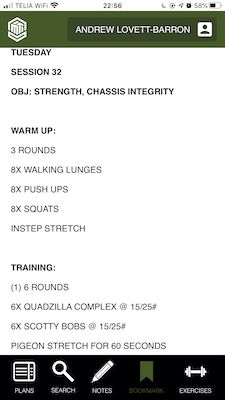 This relates to my wardrobe because the fabric we wrap ourselves in serves to work a kind of daily muscle. In some ways, we are incredibly constrained. We have a limited wardrobe, filtered through biases and the influence of media and the social scenes that we came to age in, to address a specific set of needs around environmental (rain, temperature), cultural (formality and clique), and personal conditions (mood, aspiration, functional exigencies).

But in other ways, it is incredibly liberating. It presents a daily opportunity for creativity, exploration, and novelty with the things that we already own, that are being created seasonally, or that others have left behind in the case of vintage. With all the cultural weight that goes into forging a particular piece of clothing — anatomy, cultural context, history, material requirements, cost requirements, style, and similar — there’s the daily opportunity for something new to emerge.

Despite having that opportunity (and me more than many with my absurd jacket collection), why wasn’t I working that muscle? I felt there might be a hint in the three things that these text-based training plans were giving me: productive friction, a need for planning, and additive practice. So I’m doing an experiment.

I’ve thankfully had a fair bit of experience working across different tools for project management. Everything from spreadsheets to Basecamp to Trello to Podio were potential options. I’d been aware of Notion for a while (mostly via a constant stream of Medium posts about either going to Notion and never looking back, or leaving notion and looking back in sadness), and from the ambient knowledge I had about it suggested that it might be a good option.

While my understanding of what Notion could do was pretty loose, the core of it seemed to be relational databases (data referencing other datas) with a handful of configurable views into that data: from table to spreadsheet to graph. Without thinking about it too hard, this felt like a good starting point.

Think about how you structure a wardrobe. You have lots of different types of clothing, all of which fulfill usually one or two functions. They have different properties to them: some are warm, others are waterproof, some are both. Some are made of leather, others of synthetic fabrics, still others of cotton. Some are blue, others gray, others black (at least in my case). So one can broadly generalize “clothing” as something with properties that serves to shield some part of your body. Of course, there are other things. Shoes, accessories, bags, etc. We’ll get to that.

In general though, an outfit ends up being some combination of those pieces of clothing, plus some of the other things. That combination is most fundamentally constrained by the cultural and physical environment, and what you have available. Then you get the next level down: constraints emerging from ones own taste and context — where did you learn to dress yourself? And then you get additional constraints emerging from the combinations with contrast, clashing, and complementary mixes coming up across variables of colour, fit, material, and so on.

Ultimately, no system that I put together in an afternoon is going to replace a sense of style and intuition, but maybe I could make something that productively augments what I already have. So I set out to accomplish a few things:

Understanding Notion as I did, I believed that the relationships would loosely look like:

So I set out to implement it.

Clothing Using Notion to realize the initial vision was simple. At its most basic, Notion’s data manifests as a table or text. I started by creating a list of as much as I could from memory (mostly jackets and sweaters), and then filling that into the spreadsheet. From there, I started to fill out the properties (i.e. columns) that made sense. Name, photo, tags, size, colour. Then more subjective things, like fit and potentially style: things that I could search by. This first part set up, I went full Mari Kondo on my closet, getting everything out and photographing the lot against a white(ish) background. This was the project of an afternoon, quietly accomplished during my son’s naps and an hour my wife was able to buy me. After I got everything in the database (all clothes, shoes, and bags anyway), I started to explore setting them up as separate views and creating the relational structure that would define the “outfit” idea. 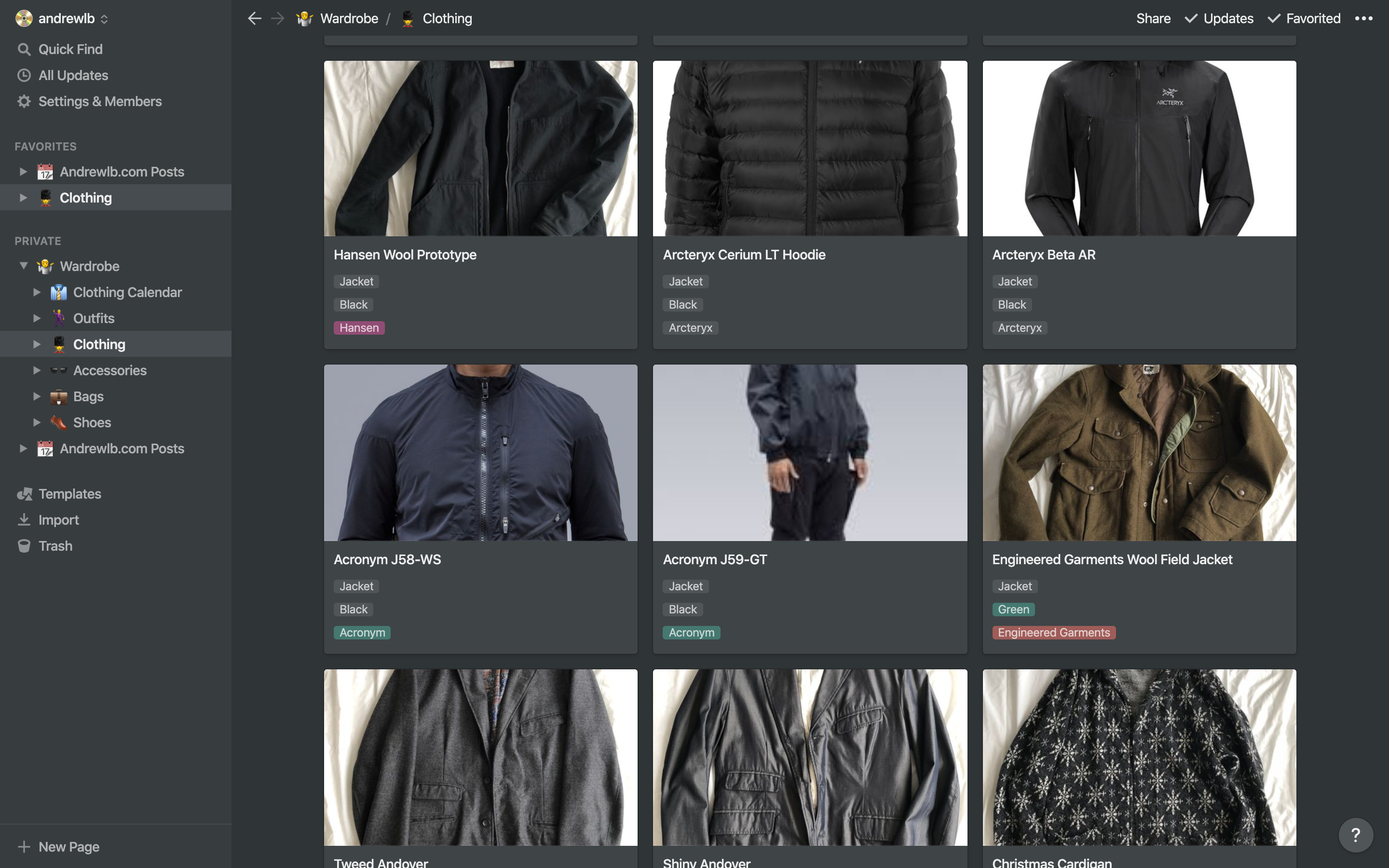 Outfit The outfit is where things didn’t quite work as I wanted. Structurally, it’s relatively simple — just a matter of creating relationships to the different Clothing items. This ends up looking something like this, with a few variables that help with filtering and a photo for reference. 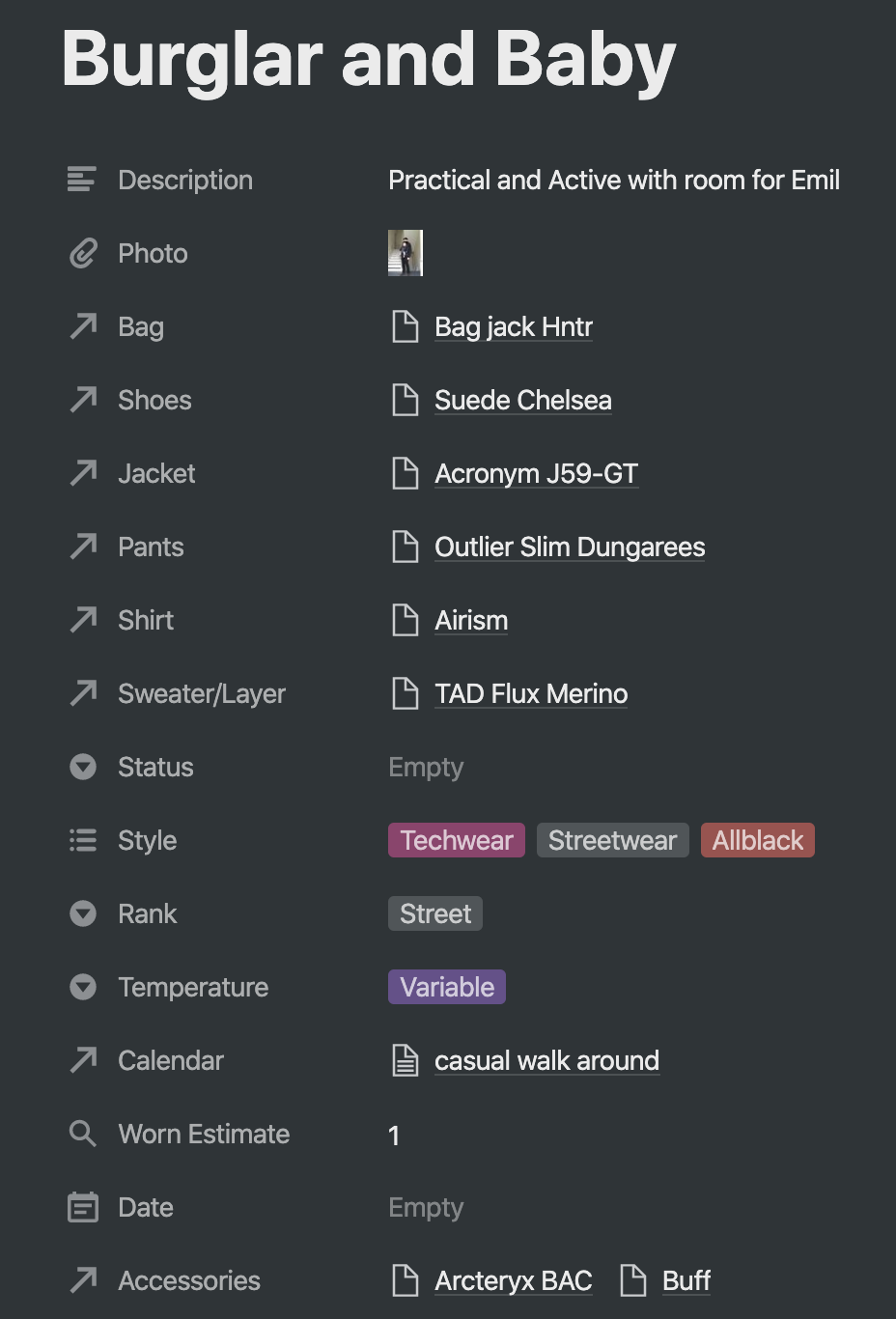 Model of an Outfit

Then, when browsing, I can view the individual outfits with a description and a focus on the jacket. 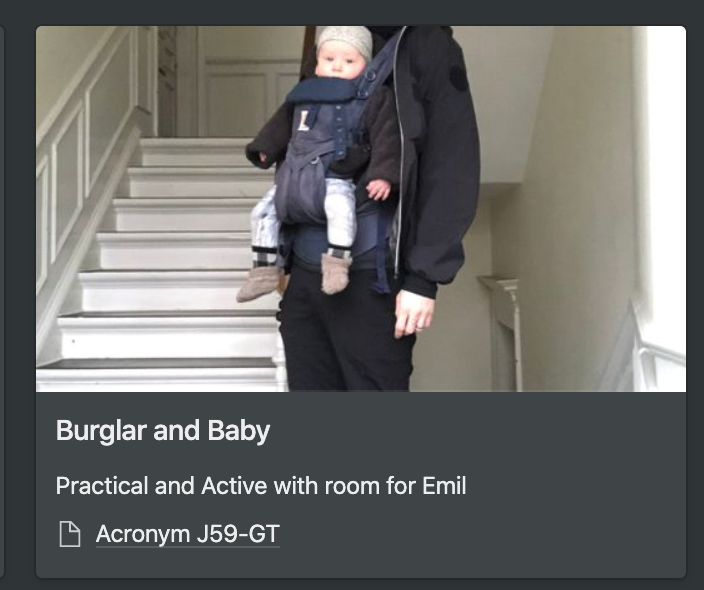 Thumbnail of an Outfit

In this case, I would frame this part as the “Productive Friction” component. Before I was just collecting data and constraints, now this is combining these pieces into a greater whole that (hopefully) works out.

Though this solution is “good enough” for now, I can’t wait for Notion to develop an API to query these objects and relationships directly, or to programatically establish filters. Basically, my ideal would be to create a collection of items with tags, and then have those items laid out in a gallery so I could see them visually. As it stands, there’s still a bit too much friction. Additionally, the actual selection of a relationship is a bit cumbersome with the naming scheme that I developed.

The manual way to do this is to create a view for a table, and then filter according to relationships. Unfortunately, since those filters can’t be assigned to a variable, the whole thing has to be done manually (as far as I know). The ideal would be to pass in a series of properties to the view that could manipulate the filter, but here we are. 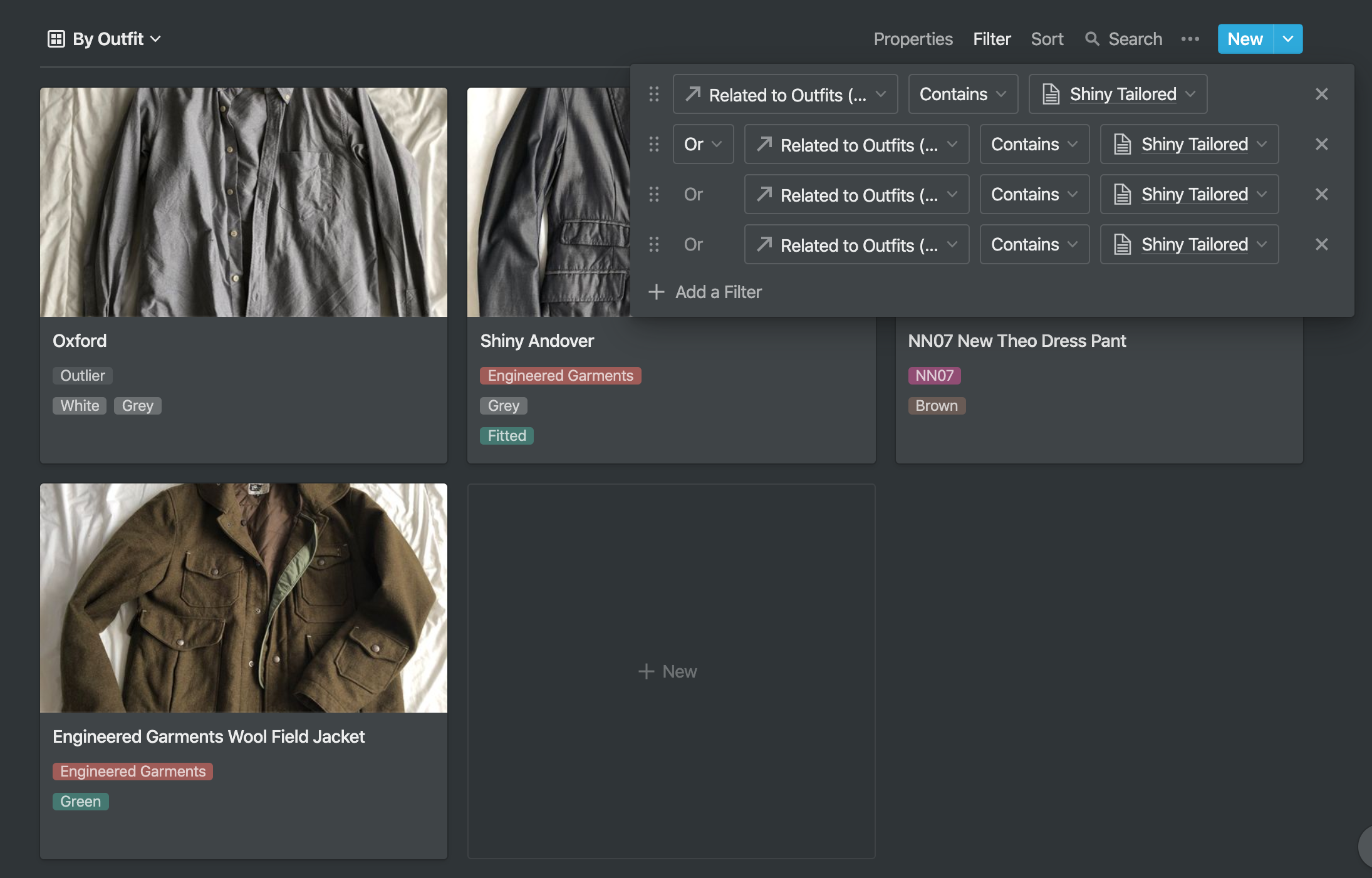 Calendar Finally, actually making a day-to-day decision is tied to seeing those combinations and those other external needs. In other words, the need for planning. Filtering by the relevant constraint is the key here, organizing by one axis and filtering by another. I can take a look at the options and what I need for the day and make decisions on the margins. 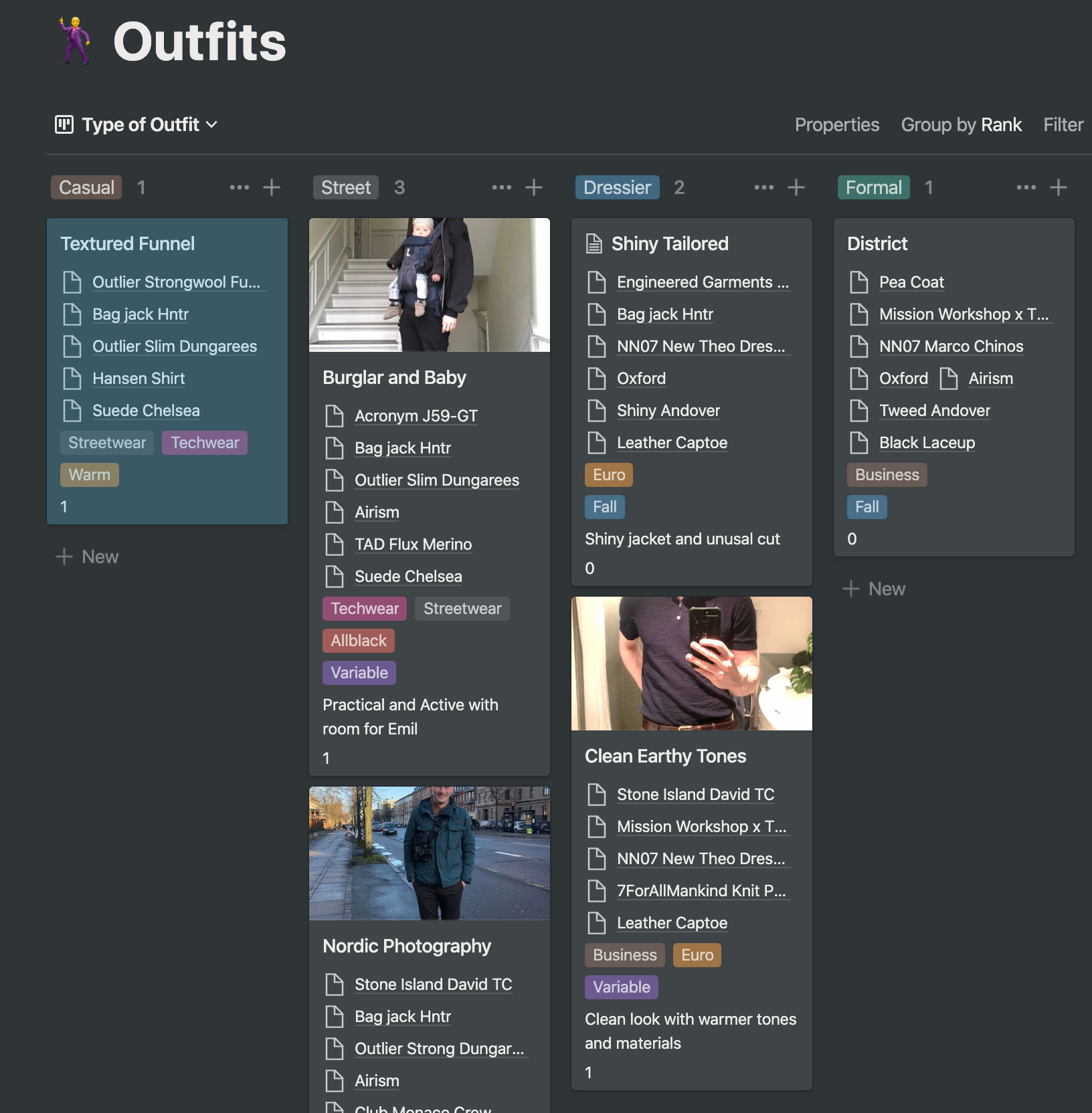 Calendaring is usable but a bit inefficient. This is an example of the past few days to test out this whole idea. Unfortunately, Notion lacks integration with Google calendar, so the calendar view itself ends up being quite limited.

What was useful (again, an API would be better) was filtering calendars by day, and then adding the view inline as shown below. This allows a trivial dashboard to be created, though again, it’s not particularly useful without a way to dig into the relations. The other frustrating piece is that these views seem to “reset” depending on other navigation you do within the database. 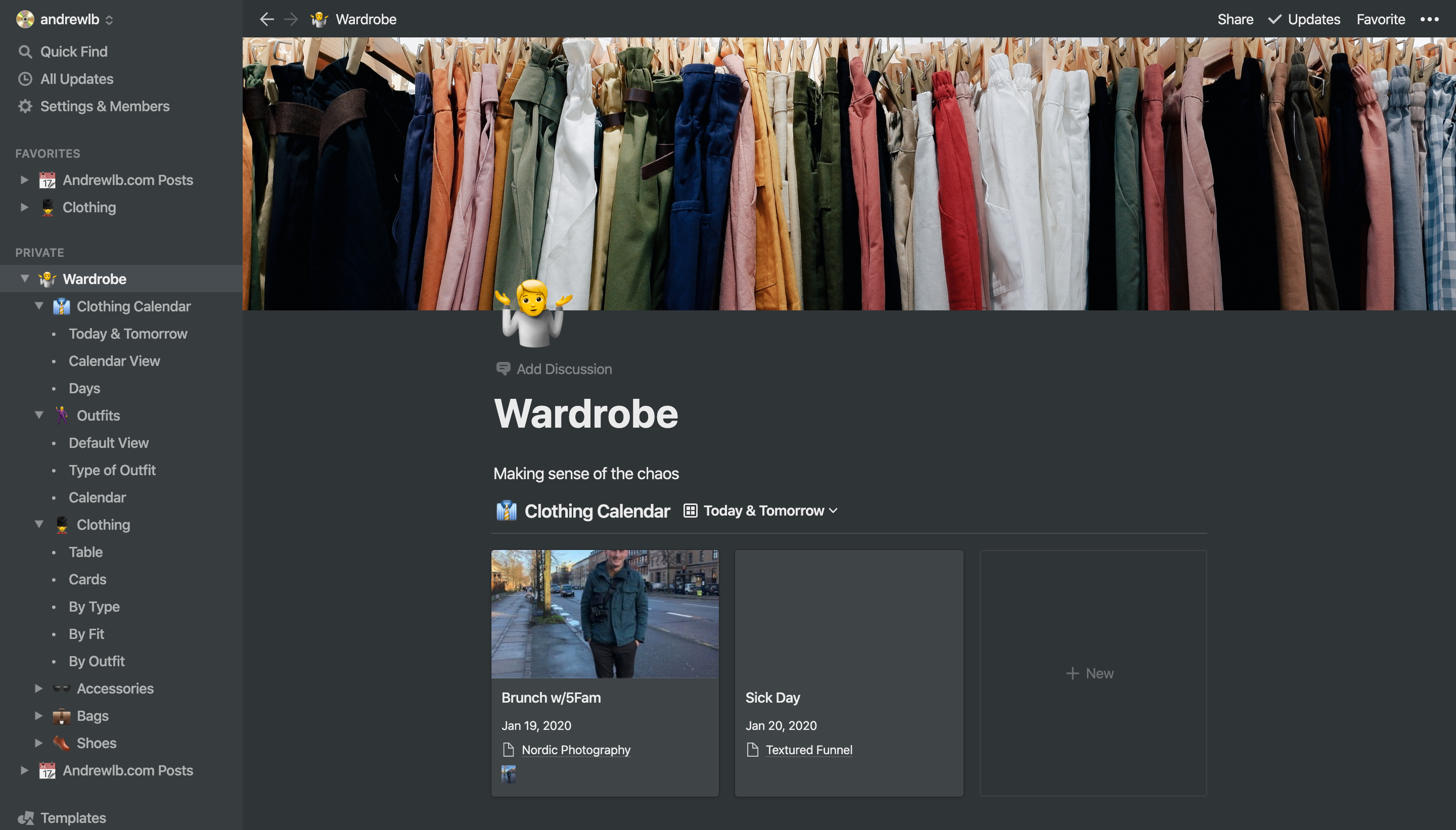 Conclusion Notion is a pretty impressive tool. It’s a great way to create content and build up something data-driven pretty quickly. Ultimately, it got me a lot further than I expected, but if the Notion public API wasn’t already a critical part of their roadmap, I would probably be trying to figure out how to export all this work and build a small custom solution.

End of the day, a custom solution would be better, but as a catch all tool for personal organization or project management (eg. You can see in the screenshot that I’m also using Notion to plan and track these posts), I’m pretty happy.

Technical details of how I’m approaching this aside, does it actually work?

I’m not sure yet. I’ve worn colours and individual pieces over the past few days which I haven’t touched in months. One pair of shoes had to be dusted off (though thankfully I’d taken good care of them previously). So only a few days in, I do feel like it is having an impact.

My hope is to follow this pattern for a little while. This is where the additive practice part comes into play. A decade ago, I followed blogs like the The Sartorialist and FaceHunter, but never understood quite how someone got from where I was to where some of the repeat subjects on those blogs found themselves. Now, I don’t feel that same need, but I do want to use what I have for the greatest utility and the greatest fun. In this case, it means the goal is to reduce my sense of decision fatigue and increase the variability and interest in what I wear. So I’ll practice. I’ll follow this post up in a few weeks or months with the outcomes.

stupidfitsfashiondesignproductivityprototyping
Previous Article
Reflecting on 2019
Next Article
Import your Audible Library to Goodreads
Subscribe to my weekly newsletter (along with hundreds of others). I keep it short and useful.